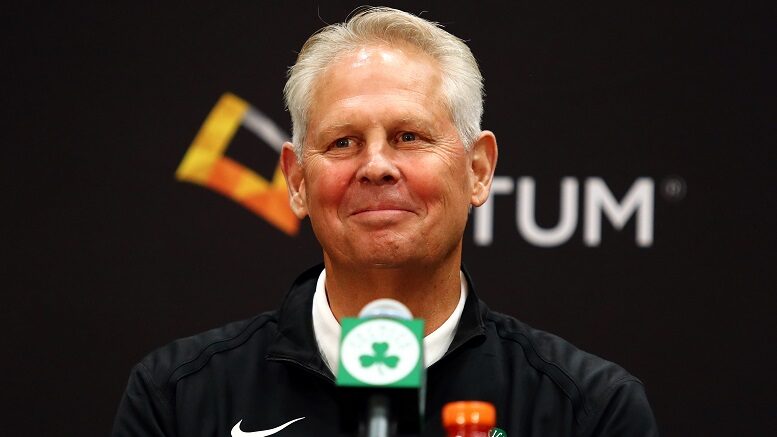 If there’s one thing we know about Boston Celtics president Danny Ainge, it’s that he’s always plotting, always scheming, always looking for the next move.

They don’t call the man “Trader Danny” for nothing.

And according to Kevin O’Connor of The Ringer, Ainge and the Celtics are making calls in an effort to trade all three of their first-round picks to try to move up in the draft.

The good news for the Celtics is multiple teams are apparently willing to trade down.

The bad news is the 14th pick, coupled with two picks that may as well be second-rounders, haven’t really interested anyone, O’Connor noted.

Remember, three first-round picks means three more guaranteed contracts — and that may not be something any team wants to add with all the uncertainty surrounding revenue and the salary cap.

Now, if the Celtics threw in a veteran that could help a team generate some buzz, well, maybe that would be enough to move high into the lottery.

A quick look at the draft order makes you think only teams such as the New York Knicks (drafting eighth) or Detroit Pistons (seventh) would even consider an offer to move down for more picks. But either scenario would likely have to include the exchange of veterans.

The latter is probably something the Celtics wouldn’t want to do after advancing to the Eastern Conference finals this past season. Their core is pretty much untouchable.

Still, it’s highly unlikely they want to bring in (and pay) three more rookies, so Ainge is likely to keep trying to find a taker. Perhaps even if it means moving to the middle of the first round.

The NBA draft is scheduled for Nov. 18.

Stan Van Gundy is bringing in an old friend to assist him with the New Orleans Pelicans. According to Adrian Wojnarowski of ESPN, Van Gundy…

Warriors may have interest in Suns forward Oubre Jr.

Later start preferred by NBA players could result in 50 games

Nets bringing in D’Antoni, Udoka as assistants to Nash

A look at free agents heading into the 2020 offseason, including those with player and team options (age in parentheses). The free agency period is…