The league‚Äôs trade moratorium could be lifted as soon as this weekend. If not this weekend, then by early next week.

That means teams would be free to wheel and deal and make all the moves that lead them to relevance. At least, that‚Äôs what they‚Äôd tell you.

Even if not, this is the most exciting time for a lot of teams and those who root for them. It‚Äôs the Trade Deadline Before The Trade Deadline, the before-the-season deadline that allows everyone to go into training camp with some hope. And if not hope, at least the statement that, yes, this will be a season to “acquire assets” and go deep into the draft lottery tank.

And there are already plenty of trade rumors out there. (None involving the Cavaliers, mind you, but given the history of general manager Koby Altman, you just never know.)

The Milwaukee Bucks, Orlando Magic and Oklahoma City Thunder are said to be among the most active teams.

The Bucks want to find help for Giannis Antetokounmpo, and they supposedly want to do it without surrendering fellow All-Star forward Khris Middleton.

The Magic are supposedly floating Aaron Gordon and their draft pick to move into the lottery. (If you‚Äôre Cavs, you do that yesterday.)

The Thunder want to move Chris Paul, and by all accounts, they will — before the season. The Phoenix Suns are said to be the early frontrunner, but others are in the mix. Paul has also been linked to the New York Knicks, Philadelphia 76ers and Los Angeles Clippers.

Oh, we almost forgot the San Antonio Spurs. They missed the playoffs for the first time in 21 seasons. Word is, they are up to something big. Reports say they are determined to move on from three of their older players — LaMarcus Aldridge, DeMar DeRozan and Patty Mills.

All of the above is just the half of it.

A lot of conversations between GMs will continue to take place, a lot of leaks will make their way to social media and websites just like this.

Eventually, those deals will become official, and soon. Training camp is about three weeks away, so this will be the shortest offseason in NBA history. That means the quickest offseason trades in NBA history will be coming to your computer screen or mobile alerts very soon.

Brace yourselves, NBA fans. It‚Äôs about to get intense.

Be the first to comment on "NBA could open trade window this weekend, bring rumors to life" 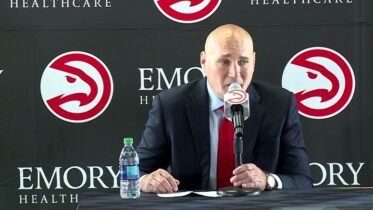 Amico: Cavs‚Äô Drummond picking up option, but what now?