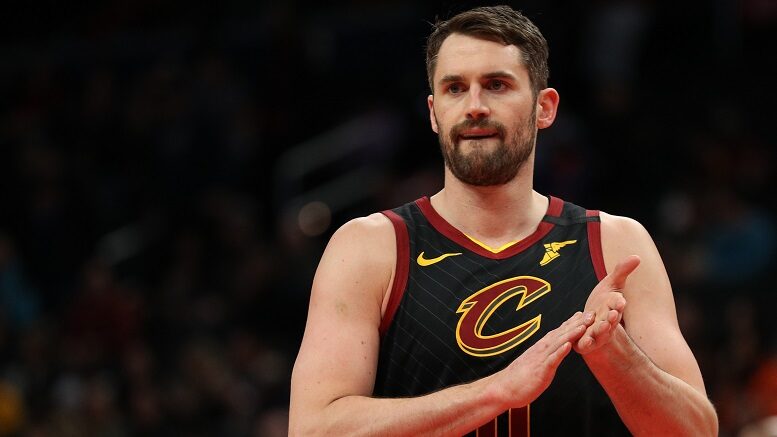 Cavaliers power forward Kevin Love takes the court during a game against the Wizards.

That would be none other than power forward Kevin Love, the lone remaining starter from the 2016 championship team.

Bickerstaff spoke Tuesday, the first day of official business for the NBA’s 2020-21 season. Players returned for individual workouts and coaches and players spoke to the media. So, welcome to training camp, with group workouts starting next week.

As for Love, there is a sense (again) that the Cavs spent the offseason contemplating the idea of a trade. But as usual, a lot of that was hot air and Love is back for another run. He has two years left on his contract, so he and the Cavs may as well just keep getting used to each other.

Of course, older players prefer to play for winning teams. The Cavs aren’t expected to be one. They may be better than the last two seasons, which generated a measly 19 wins each year. They are expecting to be better, actually.

But as Bickerstaff noted, in order to win more, the Cavs will need production and leadership from the veteran big men. Along with Love, that list also includes center Andre Drummond, forward Larry Nance Jr. and center JaVale McGee, acquired in a trade with the defending champion Los Angeles Lakers.

That’s a pretty decent frontcourt and perhaps formidable if you have stars around it.

The Cavs don’t. They have a bunch of young guys — such as guards Collin Sexton, Darius Garland and Kevin Porter Jr., and rookie small forward Issac Okoro. Presumably somewhere in there will be small forwards Cedi Osman and Dylan Windler, a second-year player who missed his entire first.

“It’s a young team with guys who are willing to learn and want to win, but just need a little bit of guidance,” Drummond said. “I think myself, J.B. , Kevin Love and Larry are going to be able to help these guys a lot.”

Love has the most experience on the team. He has the longest history of putting up good numbers. So it only makes sense for Bickerstaff to have higher expectations for Love. The Cavs will have no shot at anything good without him.

“He’s a five- or six-time All-Star and probably a first-ballot Hall of Famer,” Bickerstaff said. “We need Kevin to be Kevin because he makes everybody else around him better.”

Be the first to comment on "Yet again, Cavs will need Love to be big, Bickerstaff says"

Nash says new Nets of Irving and Durant ready to roll, and run

Tucker getting chance to make Clippers’ roster in camp

Yet again, Cavs will need Love to be big, Bickerstaff says

Three Ball: The History of Basketball’s Three-Point Shot and How it Has Taken Over the NBA. By Sam Amico. Learn more

Antetokounmpo: I’d be fine with LeBron, KD or Davis on Bucks

Oladipo: I never said I didn’t want to play for Pacers